Did you read the newspaper today? Or perhaps instead you caught the headlines online, or on your mobile phone. You might have plugged into the daily radio talk show or shared your impressions on Twitter or Facebook and ended the day with a televised newscast. If that sounds familiar you’re what the Pew Research Center for People and the Press calls a news grazer - an integrator who is constantly shopping for news tidbits throughout the day and from a variety of sources. Representing a growing segment of the news audience, Pew notes integrators are more affluent, highly educated and younger than those who consume their news in the traditional manner- i.e. newspapers and nightly television newscasts.

The big loser in this ongoing trend is the newspaper industry that continues to see a decline in readers and struggles to redefine itself into an economically sustainable model. 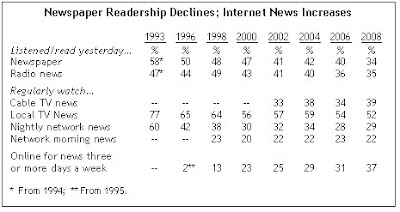 While the decline of the American newspaper industry has been happening for several years, (as noted in the table above) it is becoming more evident as new generations mature. At the opening fall semester at the Naval War College, (where I’ve taught media relations for the past nine years) I noted for the first time- not one student in the class was a daily newspaper reader. As an aside, this week the Phoenix’s David Scharfenberg has an insightful look at the Providence Journal’s attempts to adapt.

It may come as no surprise that the audience migration to the internet for news has accelerated in recent years. The real questions now is - Where on the internet are news consumers going? Having a web based communication strategy means more than just plunking up a website and hoping your audience finds you.

In fact, standard news organizations are still valuable credible ways to connect information with audiences. The biggest growth in 2008 was at sites offering legacy news. The Project for Excellence in Journalism in its 2009 report notes, “The old norms of traditional journalism continue to have value. Virtually all of the most popular news websites are those associated with traditional news organizations, whose legacy platforms are paying for the news gathering, or are aggregators, which collect content from traditional newsrooms and wire services rather than produce their own.”

The challenge now is for media outlets to figure out how they’ll raise enough revenue to continue paying for quality reporters who generate content both for traditional news sources and new media sources. With diminished reporting staffs, there is added value to well rounded public relations efforts that provide factual, efficiently packaged information that can be disseminated to news grazers on multiple levels. An effective multi-pronged new media strategy includes e-newsletters, traditional news sources, legacy news websites, blogging, and finally creating and maintaining your own interactive and interesting channels of communication.

Come clean. Do it quickly. Don’t fuel the fire.

The Red Sox’ David Ortiz used all those crisis communications techniques recently in a mostly successful effort to address his alleged failure to pass a 2003 doping test administered by Major League Baseball.

Big Papi’s PR at bat was made even more difficult by this curve ball: He hasn’t been able to see the actual test results, which are under a court seal. This made the “come clean” part of the equation very difficult, since Papi wasn’t completely certain what may have triggered the positive test result. Further, taking the time to find out would have violated Rule #2: Do it quickly. So he balanced the two by finding out what he could in a reasonable amount of time (meaning quickly enough so that it didn’t look like he was ducking allegations and not giving harmful speculation time to gain credence), then offering up the best possible response given the lack of information available to him. He believes he was “careless” with over-the-counter supplements.

There are a number of useful PR lessons that can be gleaned from Papi’s performance:
Bottom Line: Big Papi’s reputation for candor and being one of the Good Guys sustained little damage, and the matter has faded from the public consciousness – for now.

Click here to Listen to David discuss this topic on WPRO